Which component of a torch provides electricity to the bulb?

ELectic cells are used to give electricity in the following items except _ _ _ __.

The metal cap of a AA battery is:

How does an electric cell produce electricity?

Which voltage is dangerous to us:

The coiled wire that emits light from a bulb is:

The function of a common switch is:

Which among these can not be used to make a common switch? 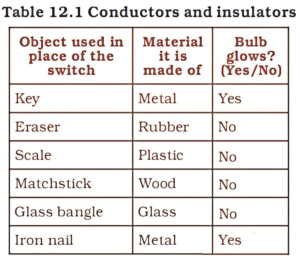