Chandni is a story of love for freedom. In Almora (A hilly place in Uttarakhand) there lived Abbu Khan. He lived alone with their few goats. Abbu used to treat his gots as their own children and would call them with funny names like Kalua, Moongia, Gujri, etc. He used to give their goats the juiciest grass and grains.

Yet, often the goats used to break the rope and disappear in the forest. There was a fierce wolf in the forest. Abbu was not able to understand the reason. 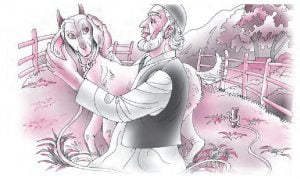 Soon there were no goats left. Abbu decided to live without them. But soon, he was alone. He bought a healthy and young goat. He was of the thought that the goat is young; she will love him and will never go away. He named the got “Chandni” which means moonlight.

Many years passed and Chandni was still there in Abbu’s home. Abbu uses to tell her the stories of other goats who were killed by the wolf. Chandni was of a friendly nature. She would listen to Abbu’s story with interest and affection. 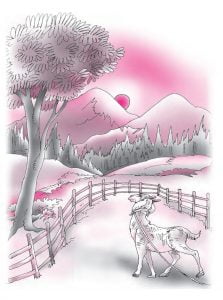 Every morning she watched the hilltop bathed in sunlight and missed the refreshing breeze. Now, she stopped eating and became very thin. Abbu did not understand the cause. One day she decided to talk to Abbu. Abbu was said hearing the wish of Chandni. First, he tried to convince Chandni with the green grasses, longer rope, and stories of other goats. Chandni did not lose her determination. Now Abbu was angry and put her in the room with the rope tied. 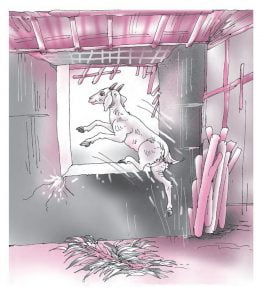 Very same night Chandni was able to escape as she broke the rope and the window was open. She walked on the hills and was very happy. Chandni walked all-day with joy. She met a group of wild goats. The group offered her to join the group. But Chandni refused as she was wanting to enjoy her freedom all by herself. 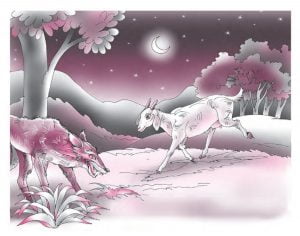 Soon the sun hid and moonlight appeared. Now there was a fiery wolf with red eyes in front of Chandni. Chandni had no option and decided to fight back as she felt this freedom worth better than returning to Abbu’s home. Chandni was lesser in size yet healthy. She stood firm and pointed her hard horn towards the wolf. The fight went long.

Moon and stars disappeared with time and a new ray of sun came to the hilltop. Sun saw Chandni soaked in blood. While, the wolf,  tired and sleepy, was getting ready to devour Chandni. A herd of birds sat on the tree and was debating about the winner. All birds said the wolf is the winner. A wise old bird said in a firm voice “the winner is Chandni”.

Moral of the story: Everyone loves their freedom. This freedom is not confined only to humans but also applies to other creatures as well.  Through this story, the author tries to tell the importance of freedom. We should live with independence and should never hurt someone else’s independence.

See also:  6. I Want Something in a Cage Summary.