A tiger in the house is a short story by Ruskin Bond. Ruskin Bond is a famous author whose childhood went in hilly areas od Dehradun. This story is about his grandfather and a tiger cube. Once his grandfather was walking in the forest. There he found the tiny tiger cube. He brought it to the home and put the name ‘Timothy’ 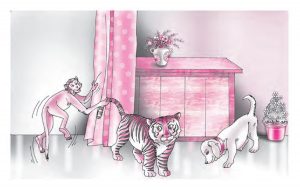 Timothy soon mingled with the grandfather, the cook Mahmoud, and a monkey. Money played with him and also teased him. Grandfather soon brought a dog puppy in the home. Initially, the tiger was afraid of the puppy. But soon they became friends and the tiger let the dog roll over him.

Things change with time. At the age of 6 months, Timothy became less friendly. During the walk, he would sneak away for street dogs and cats. During the nights he would go to the poultry house. And in the morning we would see feathers of hens. 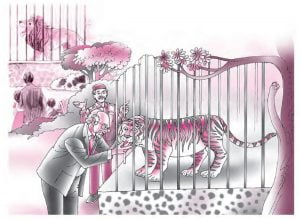 Now, timothy had also started staring Mahmoud with evil eyes. The grandfather understood that time has come to leave Timothy to a zoo in Lucknow. The grandfather put him in a zoo. The zoo was happy to have a civilized tiger.

Visit of the grandfather to the Zoo

An Alien hand is a  collection of interesting stories meant for class 7 students. Find below the Solution and summary of various chapters here.

An Alien Hand Summary in English and Hindi, Question-answer.