1. The shepherd hadn’t been to school because

a) he was very poor.

b) there were very few schools in those days. 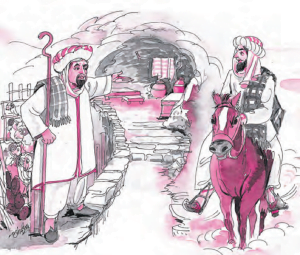 2. Who visited the shepherd one day, and why?

Ans: One day the king visited the shepherd.

The shepherd was very famous in the village for his wisdom and humbleness. His fame reached the kings. So, the king decided to test the humbleness and the wisdom of the shepherd.

3. Why did the other governors grow jealous of the shepherd?

The shepherd was famous in the village due to his wisdom and friendliness. Once he became the governor of a district, he also became popular there. His fame created jealousy among the nearby governors. Another reason for discontent was that the shepherd always carried an iron box with him. Other governors were in the misconception that the shepherd has a lot from bribe and the box contains gold and jewels.

4. Why was the new governor called to the palace?

The new governor always took an iron box with him. Other jealous governors thought that there were jewels and gold in them. They told their thoughts to the king. The king to check the governor’s box summoned the shepherd to the palace.

5. Why was everyone delighted to see the iron chest on the camel’s back?

Everyone was expecting that the chest contains jewels and gold. When the shepherd arrived with the iron box, people thought that now everyone will know how much money the shepherd has stolen from the district. So, the closure of suspense excited them with delight. 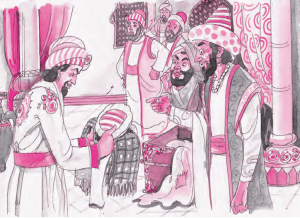 a) What did the iron chest contain?

b) Why did the shepherd always carry it?

The shepherd always lived a simple life. He thought the if the king sakes him from the governorship, only this blanket will help to live well.

c)Is it an example of the shepherd’s humility or wisdom both?

The shepherd always lived an ordinary life. He always helped people with friendliness. During his entire tenure of the governorship, he was ready to be fired and live the miserable life again. This simplicity showed the humbleness of the shepherd. The shepherd was also a very clever person. He was knowing that other governors are jealous of him and someday he will be asked to prove his innocence. This banket in front of the king showed everyone that he never stole any money from the district.

7. How did the king reward the new governor?

The king knew that the shepherd is a humble and very helpful person. He never stole any money from district funds and taxes. So he decided to promote him. He made the shepherd a governor of a big district.