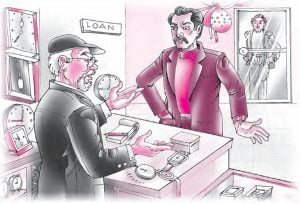 1. What made Ray think the visitor was not really a shopper?

Answer: Usually, people who come to shop to fulfil their needs by buying goods. Their behaviour is friendly and polite.  The old man appeared unfriendly with Ray. He gave a cruel and mocking smile to Ray. He was accompanied by a 20-year-old boy who stood at the door to watch people. There was a gun like a shape in the left pock of the old man.

2. Why do you think he had come to the shop?

Answer: The old man was in need of money. He thought that he can rob the watch shop and get the money.

3. How did Ray communicate with him?

Ray was deaf. He communicated with a notepad.

4. What do you think the man said to his friend who waited at the door?

It seems that the old man would have said to the boy to stand at the door and do not let any person in.

5. Ray was not a pawnbroker. Why then did he lend money to people in exchange for their old watches and clocks?

Ray was a friendly person. He did not want to refuse the needy people who came to him lend their watches. 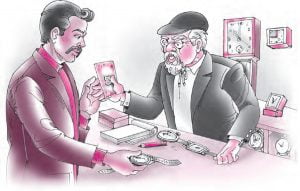 6. “The watch was nothing special and yet had great powers.” In what sense did it have ‘great powers’?

The watch was accompanied by an old man who was having a gun in his pocket and was in dire need of money. So, the watch was not special but Ray offered him more than its value.

7. Do you think the man would ever come back to pick up the watch?

The old man was ashamed of his unfriendly behaviour and intention to rob. While leaving the sho he told the shop owner that he will come back and take back the watch. He also greeted Ray with Merry Christmas!. So it looks like that the festive environment of the Christmas and friendly behaviour of Ray changed his mind.

8. When did “the unfriendly face” of the visitor turn truly friendly?

Festive environment and festivals fill people with joy and friendliness. Festival offers peace and good-will to people. Ray was friendly and polite with the old man. He devised an easy alternative to rob. He pawned the watch and gave more than the actual value of the watch. Festive sean and Ray’s behaviour eased the old man and made him behave friendly.