I Want Something in a Cage Solution

(ii) He was very concerned about the well-being of the birds and animals in his shop: FALSE.

(iii) He was impressed by the customer who bought the two doves: FALSE.

(iv) He was a successful shopowner, though insensitive and cold as a person: TRUE. 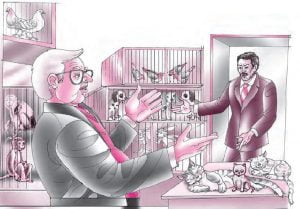 (i) Mr. Purcell ran a pet shop. There he was selling birds, cat, dogs, monkeys and their foods.

(ii) The stranger put the doves free. Mr. Purcell felt insulted by this as he sold the dove at a very low price. This act shows that Purcell cared only for money, and not for the well being of the birds.

(iii) Purcell was perplexed by the stranger’s act; as the stranger bought the dove at a very low price and made them free. Purcell was awestruck by this and felt like being cheated.

(iv) Mr. Purcell was running the shop for money. He always calculated the cost of pets before selling but never cared for the pets. He never gave attention to the bird’s chirping or pet’s sound. These incidents show that he was though successful in a running shop, he was an insensitive person.

2. Why is Mr. Purcell compared to an owl?

Owls are intelligent but selfish animals. They are clever in finding food and do not care for anything. They have large eyes. Mr. Purcell was an insensitive person who never looked for pets’ welfare but the money. He wore large glasses which made eyes look large. So, the author has compared Purcell to an owl.

3. From the third paragraph pick out

4. “…Mr. Purcell heard it no more than he would have heard the monotonous ticking of a familiar clock.” (Read para beginning with “It was a rough day…”)

Answer: It refers to the chirping and squeaking of the birds and pets of the pet shop.
(ii) Why does Mr. Purcell not hear ‘it’ clearly?

Mr. Purcell was an insensitive person. He did not care for his pets. He was used to of the sound of the birds and animals.

1. Do you think the atmosphere of Mr. Purcell’s shop was cheerful or depressing? Give reasons for your answer.

2. Describe the stranger who came to the pet shop. What did he want?

The stranger was with a shiny shoe which was making sound with every footstep. He was wearing a new but cheap and ill-fitting coat. He was having close-cropped hairs. In all, he was looking like a poor money deprived person.

He looked throughout the shop and demanded something in the cage.

3. (i) The man insisted on buying the doves because he was fond of birds. Do you agree?

No, the man had come to shop to free the birds. The man was in prison for 10 years. He knew the value of freedom.

(ii) How had he earned the five dollars he had?

The man worked hard in prison. For every year he earned a half dollar. So, it took 10 years to get 5 dollars.

4. Was the customer interested in the care and feeding of the doves he had bought? If not, why not?

The customer did not listen to Purcell when Purcell was trying to tell about the feeding and rearing of the dove. He let the dove fly freely in the air. Thus, the customer was interested only in giving freedom to the doves.

Discuss the following topics in groups.

1. Why, in your opinion, did the man set the doves free?

The man was in prison for 10 years. He knew the value of freedom. So, he let the dove free in the air.

2. Why did it make Mr. Purcell feel “vaguely insulted”?

Mr. Purcell was a professional shop owner. He cared only for money. He sold the dove at a very low profit and the customer let the dove free in the air. This surprised Purcell and made him feel insulted.

The cop and the Anthem Solution.

I Want Something in a Cage English Summary.

I Want Something in a Cage Solution