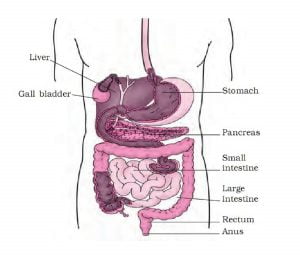 1. Boojho is fascinated by the highly coiled small intestine. He wants to know its length. Would you like to make a wild guess? Can you imagine how such a long structure is accommodated in a small space within our body!

2. Paheli wants to know how food moves in the opposite direction during vomiting.

Sometimes when we are travelling, or eat undigestible food, it triggers the vomiting centre in the brain. It signals the oesophagus and stomach for reverse peristalsis. Here oesophagus and stomach push the food in the backward direction. As a result, the undigested food comes out from the mouth. We call this process ‘Vomiting’. It is usual in some people who have motion sickness.

3. Paheli wants to know why some animals like cow and buffalo cannot chew food properly at the time they take it in?

Animals including human cannot digest cellulose fibre of husk. Cattles have a special chamber called Rumen in the stomach. Here a few useful microorganisms live and break cellulose into glucose. Cattles like cow, buffalo, goat first engulf the husk and transport it to the rumen. Microorganisms break the cellulose. Now the cattle bring it back to the mouth and chew it. We call this process ‘rumination’.

4. Boojho wants to know why we cannot digest cellulose as the cattle do.

In the rumen of a cattle, microorganisms reside which break the cellulose into glucose. Human does not have rumen or any place in the stomach where these cellulose converting microorganism can live. As a consequence, humans cannot digest cellulose while cattle can do.