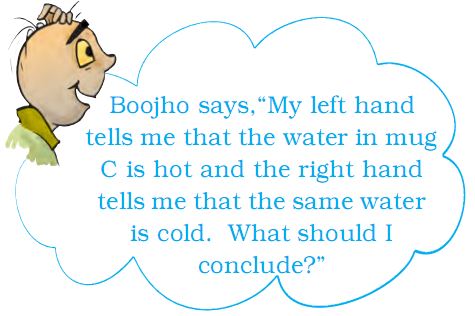 Question 1: Why do our hand feel different to touch the object which has the same temperature.

A similar thing happens when we put hands in different solutions one by one. If we put one hand in hot water and another in cold water, then we put bot hands in mixed water first hand will feel cold while the later hand will feel warm. See Activity 4.1.

Answer: Our average body temperature is 98.6 ºF or 37ºC. Both indicate the same temperature. Fahrenheit scale is an old scale for measuring the temperature. Now we use celsius scale.

Question 3: Paheli measured her body temperature. She got worried as it was not precisely 37°C.

Body temperature varies from person to person. It may be slightly higher for some people and maybe lower for someone. In a population, the average temperature is 37°C. We take this as a reference. Unless there is a significant variation like 39°C, 40°C, we should not worry.

Q4. Boojho got a naughty idea. He wanted to measure the temperature of hot milk using a clinical thermometer. Paheli stopped him from doing so.

Answer: A clinical thermometer can measure only between 35 to 42°C. Beyond 42 its mercury will not move further and the boiling milk may even break the thermometer bulb or glass. So, Paheli did goodby stopping him from doing so.

Note: A lab thermometer can measure -10 to 110°C temperature.