Activity 1.13 asks us to heat camphor or ammonium chloride into a beaker and observe what happens.

Heating camphor or ammonium chloride result in its vapour formation. These vapour cool at the upper part of the beaker and deposit there.

Cotton plug on the beaker prevents the escape of the formed vapour. In the upper part of the beaker, the temperature is lesser. As a result, the vapours cool down and deposit as solids on the neck of the beaker. This process of conversion of gas to solid is inverse of sublimation and we call this process Deposition.

This experiment demonstrates the process of sublimation and deposition.

This experiment shows that camphor and ammonium chloride can be easily sublimated and deposited. 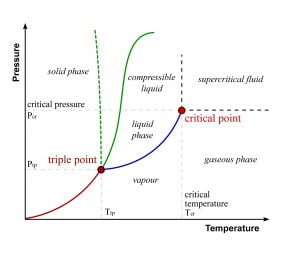 We use the term “triple point” to demonstrate sublimation. It is the temperature and pressure where all the forms of a substance 1.e. solid, liquid and gas exist in equilibrium. A triple point is fixed for a substance. For water, it is 0.01 °C and 4.5mm Hg of pressure. A substance with a narrow liquid phase easily sublimates.

Next: Experiment to demonstrate the change in the rate of evaporation, Activity 1.14.

See also: Experiment to demonstrate conversion of the physical state of a matter into another physical form by temperature, Activity 1.12.