Activity 8.11 asks us to make a stone move with a uniform circular motion using a string and watch the direction of the once the string is released.

The stone goes in a straight line motion perpendicular from the string.

After repeating the same process again and again, we see that the stone goes perpendicular from the center from different positions. 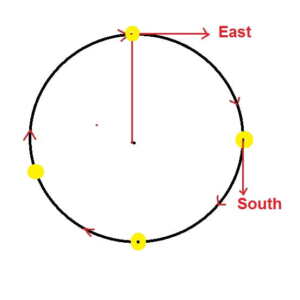 In a uniform circular motion, the direction of the stone changes with time. It results in a change in velocity and acceleration. This creates an outward force on the stone. The string balances this outward force by producing the tension in the string.

Once we release the string, it removes the tension force. Now the stone becomes free. As a result, the stone makes a straight line motion and goes away from its circular path in the perpendicular direction.

Other activities explanation of Chapter 8 Motion.