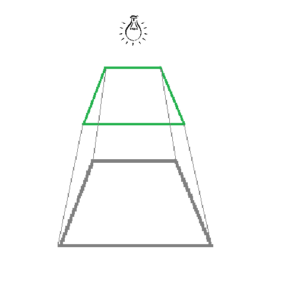 Activity 1 asks us to observe the sides and angles of the polygon formed in the picture.

Corresponding angles of the polygon are of the same value and their sides are in equal ratio.

Light travels in a straight direction. Here the real polygon blocks the light. It results in the formation of a shadow. Since the source of light is at the center the shadow is proportional to the actual polygon.

An angle is givens  and it says that 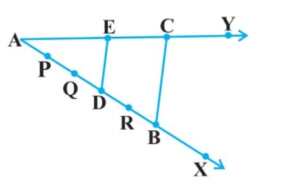 ∠ A is common, ∠ ADE and ∠ ABC are corresponding angles of a line

Here the triangles are similar. As a result, ratios of their corresponding sides are equal.

Activity 3 is the inverse of activity 2. It says that if we draw lines that are equal in ration then lines are parallel. 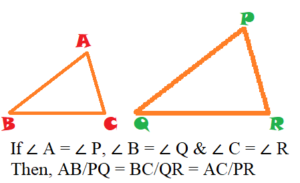 Activity 4 asks us to draw two triangles of different sizes but with the same angles.

The ratio of their sides is the same.

This is AAA similarity. When all angles of triangles are the same as the angles of a corresponding triangle, their sides are in the same ration. Ref: Theorem 6.3

Activity 5 is the converse of activity 4. It says that when the corresponding ratio of sides is equal to each other then both have the same corresponding angles. Theorem 6.4

Activity 6 says that if the ratio of two sides of a triangle and the angle between the two sides are equal then triangles are similar. SAS See Theorem 6.5.