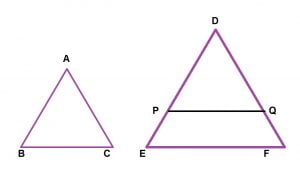 Let us illustrate using an example of the below triangle. In this figure angles in ΔABC are equal to corresponding angles in ΔDEF.

Now, let us superimpose ΔABC on ΔDEF and assume line PQ coincides BC.

Now, as per the congruency of a triangle, if two sides of a triangle and angle between them are equal, both the triangles are congruent to each other.

Now as per theorem 6.1 (Parallel line divides the sides of the triangle in equal ratio)