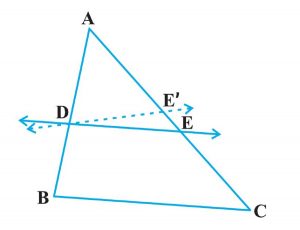 Answer: This is converse of Theorem 6.1 which says a parallel line divides the sides of the triangle in equal ratio. We use that theorem to prove 6.2.

Let us assume that DE is not parallel, instead DE’ is parallel to BC.

Next: Two triangles are similar if their corresponding angles are the same; AAA Similarity, Theorem 6.3.

See also: A line parallel to a side of the triangle divides the other sides in equal ratio; Theorem 6.1.