1. Where did the lady find the bear cub? How did she bring it up?

Answer: The lady found the bear cube in the forest. The bear cube was helpless and half-dead with hunger.

She brought the bear cube to his manor house. The bear was so small that she brought him up by feeding-bottle. Later on, she gave him bread, fruit, porridge, and fruits.

2. The bear grew up but “he was a most amiable bear”. Give three examples to prove this. 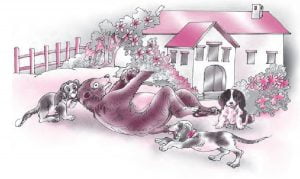 Three dogs used to play all sorts of games, pulled his ears, stump and teased him. But the bear never minded it.

Children used to play with him and were sometimes found asleep in between the paws of the bear.

The bear used to sit outside his kennel and looked towards the grazing animals with amiable nature. The three mountain ponytails never minded his presence in the stable.

These three examples show that the bear was the most amiable bear.

3. What did the bear eat? There were two things he was not allowed to do. What were they?

The bear ate bread, porridge, potato, cabbage, turnip. It was the same food that the three dogs used to eat in the Lady’s house.

Climbing on the apple tree and eating honey from the beehives were the two things which the bear was not allowed to do.

4. When was the bear tied up with a chain? Why?

The bear was put up on the chain during the night and Sundays when the lady went to meet her sister.

Bears and dogs are of similar nature. They do not like to be chained always.

5. What happened one Sunday when the lady was going to her sister’ s house? What did the lady do? What was the bear’s reaction?

During her walk through the forest, the lady heard some leaf branch crackling. The lady looked back and saw the bear shuffling towards her.

The lady thought it is his own pet bear who has broken his chain and has come trailing her. She also saw that the bear is not having his new collar.

The lady was very angry on the bear. She was having an umbrella in her hand. She hit the bear nose with the umbrella. She hit so hardly that the umbrella broke into two.

The bear was frightened with the courage of the lady. Bear fear from loud sound. The lady’s shout created a fear in his mind. He stopped and then returned back. He did not look back until the lady went far away from his sight.

6 why was the bear looking sorry for himself in the evening. Why did the cook get angry with her mistress.

The beer was sad because already lady was not in the home throughout the day. Morever today the beer was not chained so he was not able to play with other kids and dogs. So he looked sorry for himself in the evening.

While visiting to her sister’s home a bear shuffled to the lady. The lady returned from sister’s home. She thought the bear she met in the forest was the same bear. She started scolding the bear in very angry tone.

The bear was however chained throughout the day and behaved good as always. The cook used to take care of the bear as his own son. So the cook was unable to see the atrocity and became angry with the mistress.