How the Camel got his hump Solution – question answer

Answer: Dog came to the camel with a stick in his mouth. He asked the came to search for such sticks and carry it. It indicates that the dog was given the work to find sticks and carry them home.

The ox was with a yoke. A yoke is used to plowing the farm. So, the work of the ox was plowing. 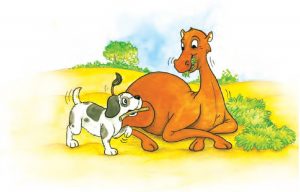 2. Why did the camel live in the middle of the desert?

Answer: Camel was a very lazy animal. He never wanted to work. SO, to avoid any work he lived far way in the middle of the desert where no human comes.

Answer: All these three animals asked the camel to work. But the camel was lazy and did not do any work. His work was incomplete. The man at the end of the day told them to the left out work of camel. So they became angry on the camel.

4. How did the Djinn know the horse was complaining against the camel?

The horse explained the characteristics of the camel. He said that there is an animal with a long neck and long neck in the middle of the desert. The animal remains idle and has not started work since Monday.

Djinn understood the animal by the explained behavior and feature of the camel.

How the Camel got his hump Solution 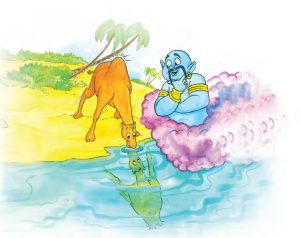 1. The camel was looking at his reflection in the pool. What does it suggest to you about the camel?

The act of looking at own reflection suggests that the camel was fond of himself and used to admire his body. He was proud of his flat back.

2. The camel said, “Humph” repeatedly. How did it affect him?

Camel was a lazy animal. He never worked and even did not respond to other animals in a good manner. To every animal, he told only a single word “humph”. When Djinn knew his behavior, he taught the camel a lesson. Since the camel only spoke Humph, the Djinn made a big hump on the neck of the camel.

3. What, according to the Djinn, was the use of the “humph”?

The humph was going to provide food for the extra three day’s work which was not done by the camel.

4. “…he has never yet learned to behave”. In light of this, what is the writer’s opinion about the camel?

A camel is a slow animal with low intelligence and monotonous gestures. The remarks in the question convey that camel did not learn from the punishment of the Djinn. It is a humorous way to relate the character of the present world camel.

Can this story be factually true?

No, this story is made for amusement purposes only. The camel is a very lazy animal. The author saw this behavior and made a fictional story.

***How the Camel got his hump Solution – question-answer***

Next: How the Camel got his hump Summary in Hindi.

How the Camel got his hump Summary in English.

How the Camel got his hump original story.