Children at Work Solution: It so happened chapter 2 question-answer

Children at work is a sensible story that focuses on how small children run from home and are put into the worst conditions. Below is the solution to the questions from the chapter.

1. Velu stood on the platform, but he felt “as if he was still on a moving train”. Why?

Answer: Velu travelled on the train in an unreserved compartment. He tried to sleep near the door, but few people near him played card and shout whole night. As a result, Velu was not able to sleep. So, when he got off the train, he still felt like he is on a moving train. 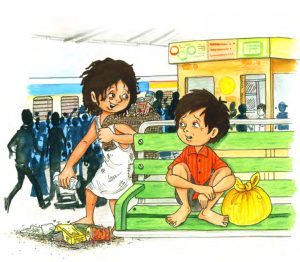 2. What made Velu feel miserable?

Velu had run out from home for the first time. Once he arrived at the platform, everything was new to him, and there was no one to look after him. He saw a large number of people running with their suitcases. There was loud noise from the announcement of the train. He was also hungry as he had only a few peanuts and jaggery for two days. All these made Velu feel miserable.

3. (i) Velu travelled without a ticket. Why?

Velu had run away from home due to his drunkard father. He had no money to buy tickets. So, Velu travelled without a ticket.

(ii) How did he escape the ticket collector’s attention?

4. Why had Velu run away from home?

Velu’s father was a drunkard person. He used to snatch whatever Velu and his sisters earned. His father used to beat him regularly. Now, Velu was faded with day to day torture. As a result, he decided to run away from home.

5. Why did he decide to follow the ‘strange’ girl?

Velu had run away from home. Now he had no one to take care of him. He was also hungry. The girl told her that she had a way to get food. So, Velu had no option other than to follow the strange girl.

Children at Work Solution: It so happened chapter 2 question-answer

1. Can Velu read Tamil and English? How do you know?

Velu knew Tamil but not English.

How: Velu was not able to read on the big hoardings as they were written in English. But he was able to read “central jail” which was written on a signboard of a big building in Tamil. This incident shows that Velu knew Tamil but not the English.

2. “If you are not careful, you will soon be counting bars there,” the girl said.
(i) What is she referring to?

Answer: She was referring to the jail.

(ii) What does she mean when she says “If you are not careful…”?

Police are not friendly with peoples in dirty clothes and without a home. They think that such people are not of good nature and can even steal other people’s belongings. So, if they see such a person, they interrogate them and might also arrest them. The strange girl was cautioning Velu so that he does not come in front of the police. 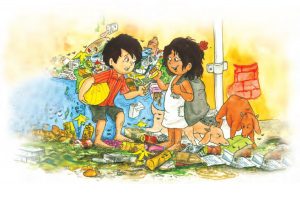 Answer: The girl took Velu to a marriage hall named Sri Rajrajeshwari Prasanna Kalyana Mandapam so that they can get the left-over food.
(ii) What did they get to eat?

Answer: They got two bananas and a vada. Velu ate one banana and a vada while Jaya took one banana.

4. What work did she do? Think of a one-word answer.

The hut was made with some malfunctioned and defective materials like metal sheet, wooden pieces, bricks and plastics.

(ii) Why does Velu find them strange?

Velu was accustomed (familiar) with houses made of mud walls and palm trees. In the slum, things were different.

2. What sort of things did Jaya and children like her collect and what did they do with those things?

Jaya used to collect bottles, plastics, papers and things thrown by passengers. She used to sell it to a scrapper shop. Scrappers sends it to factories. In the factories, machine recycles them into new products.

3. Is Velu happy or unhappy to find work? Give a reason for your answer.

The job of a ragpicker is a dirty job. A ragpicker collects paper, plastics, etc. from garbage and sells it to a scrapper. The job is a tedious one and earning is also low. Velu was an ambitious boy. He had run away from home for his betterment. So, he was unhappy with the job and decided to quit once he gets another job.

1. What was the strange girl wearing? What was on his back and how she looked?

Answer: The girl was wearing a long baniyan, which was upto her feet. Her hair was stiff and browny. She was carrying a big sack full of used bottles and plastics on her back

2. Why Did Velu not tell how He arrived at Chennai to the girl?

The girl was a stranger to him. So, he was not in the opinion to tell that he had run away from home.

3. Why was Velu hungry during his commute?

Velu had eaten only a few peanuts and small jaggery during the whole two days of the journey. So, he was hungry.

4. What was the name of the strange girl?

Next: The Selfish Giant Solution.

Children at Work Summary in English.