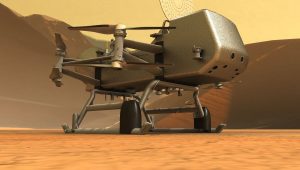 It will be launched in 2026 and it will reach on moon in 2026, in search for signs of microbial alien life on saturn’s moon titan.

DRAGONFLY is part of NASA’s NEW FRONTIER PROGRAM , which includes series of space mission, which are being conducted with the purpose of researching several of the solar system bodies including the Dwarf planet pluto.