1. if a trait A exists in 10% of a population of an asexually reproducing species; and a trait B exists in 60% of the same community, which trait is likely to have arisen earlier?

A new trait arises in a population due to a mutation in a gene. In the case of asexual reproduction, this gene transfers into the next generation. If the gene is useful to the organism or does not cause any harm, then the gene stays in the population. If the mutated gene harms the organism, gene slowly eliminate from the community.

For example, in humans, sickle celled RBC’s arose due to a recessive gene mutation. It causes anaemia in affected people, but it remains in the population as it saves people from malaria.

A gene mutation is always random and non-directional. We can only predict the time of traits which does not have either benefit or loss. In such cases, a gene with a higher percentage in the population indicates an earlier onset.

In genetic studies, if we see a large percentage of a gene in a population, it indicates a natural selection favouring the gene and vice-a-versa.

2. How does the creation of variations in a species promote survival?

Gene variation arises in a population due to the mutation in genes. In a sexually reproducing organism, a mutation in the germinal cell passes to the next generation during reproduction. Erratic mutation eliminates immediately while useful and dormant variations stay in the population. When some external environmental factor comes into action these variation helps them in their survival.

For example, there are two varieties of moth (a butterfly), White and Black. The black moth came into existence through variation. Bird pick them and eat as their food.  During the industrial revolution in the 20th century, there was an increase in the use of coal by the industries. It resulted in the formation of black soot which deposited on the trees. Now, white moths were easily distinguishable by contrasting black smoke and soot; birds almost ate all the white moth population. Here black moth survived. Later on, laws to curb pollution came into existence. It reduced the formation of soot and smoke. Now both types of moth exist in balance.

1. How do Mendel’s experiments show that traits may be dominant or recessive 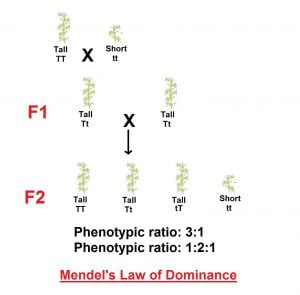 When Mendel crossed a pure tall variety of pea with the dwarf pea plant, all its progeny were tall. Presence of only one trait here indicates that when plants with two contrasting features are cross-pollinated, one variety expresses itself while the latter variety remains dormant. We call this observation as the law of dominance.

Mendel again cross-pollinated the f1 generation. Here the hidden trait reappeared in the F2 generation. From this Mendel concluded that some factors (now called gene) transfer itself during pollination. These factors exist in pair; one factor is dominant while the other is recessive.

2. How does Mendel’s experiment show that traits are inherited independently? 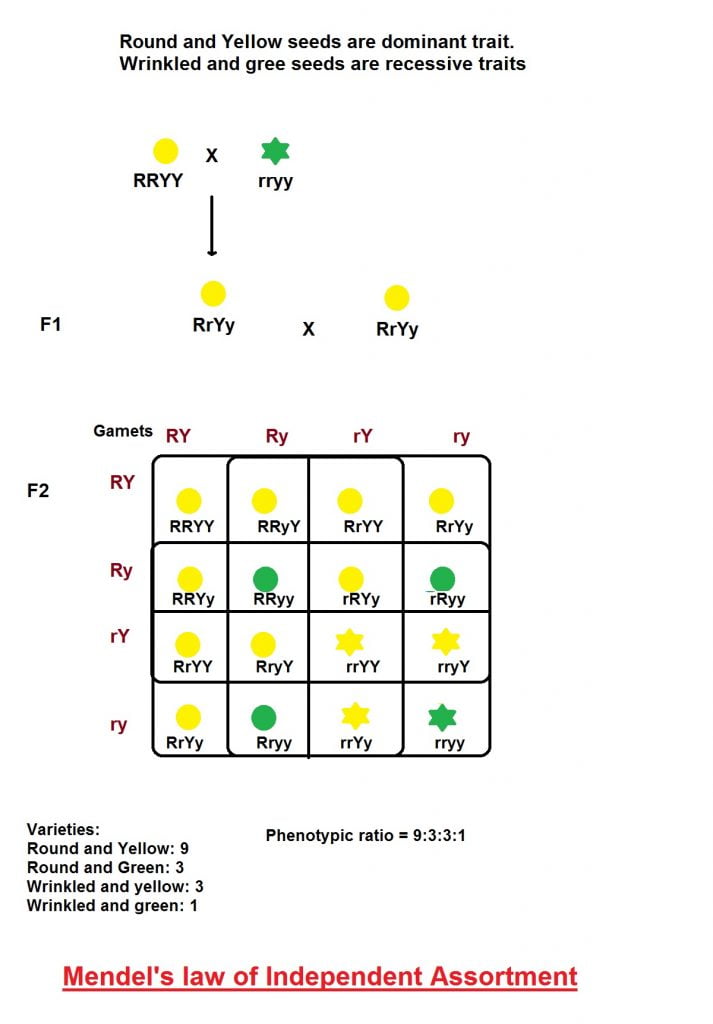 In the first experiment, Mendel examined only one trait at a time. This gave the information on how alleles of a gene pair express itself. In later experiments, Mendel took two contrasting traits and crossed them like the previous one. For example, long and dwarf variety with round or wrinkled seeds. In all the experiments, he found that if only one trait is considered the result is the same as the previous one. That meant that the two traits do not interfere with each other at all. This conclusion leads to Mendel’s second law, which we call the “Law of Independent Assortment”. 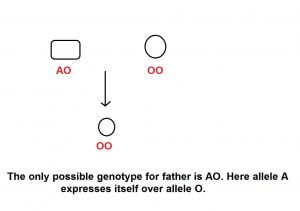 Answer: Here, we see that only possible blood group of the father is AO. Here allele A expresses itself while allele O remains silent. This expression means that allele type A show dominance over allele O.

Blood groups show multiple-allelism; there are three alleles A, B and O. Alleles A and B mutually expresses themselves when presenting together. We call this as co-dominance. Allele A and B show dominance only over allele O.

4. How is the sex of the child determined in human beings?

There are 50:50 chances for a male or female child.

1. What are the different ways in which individuals with a particular trait may increase in a population?

Individuals in a population may have different traits than others. These traits develop over a long time and are present evenly. If some environmental factors come into play and favour the particular trait; it will result in an increase of that particular trait. If the environment selectively eliminates other contrasting traits, it will also result in the same. For example, There are red and green bottles. Both live in a green plant. Birds can easily distinguish the red beetle from the green background. As a result, the population of red beetles will decrease with time while that of the green beetles will increase. Here we say a natural selection is going on which favours the green beetle.

In a small population, some accidental mishap may result in the survival of the particular trait. This particular trait later passes their trait into their progeny and increase their amount in population. We call this change in gene frequency as genetic drifting. For example, there is a tree full of red and blue beetles; an elephant comes and uproots the plant. Uprooting result in the death of most of the red beetles. Now there are more blue beetles in the population. These beetle will now reproduce and increase the amount of the particular trait.

2. Why are traits acquired during the lifetime of an individual not inherited? 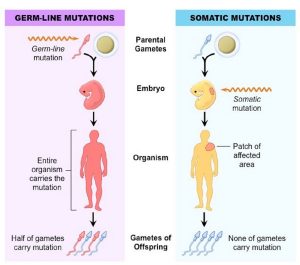 Based on inheritance, we divide all our body cells into two types: Somatic cells and germ cells. Somatic cells comprise most of our body cells which do not take part in the transfer of genes to offsprings. Germ cells develop only in the reproductive organ of the individuals. During reproduction, these germ cells carry genetic information to the next generation. If the mutation happens in the somatic cells, it does not transfer genetic material to the progeny. While if the mutation occurs in germ cell and the particular germ cell makes a new individual, then only the inheritance of new trait pass to the next generation.

3. Why are the small numbers of surviving tigers a cause of worry from the point of view of genetics?

Species of a large population have a large number of genes, and therefore the number of different genes are high. A natural selection or genetic drift cannot lead to the extinction of the species. In small populations variation in genes is lesser. Here a slight disturbance in nature or accident may wipe out all the population and gene.

Currently, most tigers are confined only to Russia, Asia and Australia, and their number is decreasing drastically even after proclaiming them as endangered species. Loss of habitat due to urbanisation and deforestation are the major causes behind this.

1. What factors could lead to the rise of a new species?

In a population variation in gene keep on changing due to mutation and genetic drift. Through reproduction, these changes mix with the population. This lead to a common evolution. But in some population physical barrier like a river, mountain, oceans etc limit intermix. For example birds in Galapagos island were limited to its island. These population during the course of evolution become different. The differences grow gradually and differences become so more that reproduction with individuals of other population becomes unproductive. Here gradually they develop into new species. Parallel evolution of monkeys and chimpanzees are such examples.

So, the factors, we can conclude are:

2. Will geographical isolation be a major factor in the speciation of a self- pollinating plant species? Why or why not?

In self-pollinating plants male as well as female reproductive parts lie on the same plant. Pollinators like insects and honeybee transfer the anther to the stigma of the same plant or different plant. In most of the cases, the plant is the same or nearby plant. So, they are already reproductively isolated and geographical isolation does not have any significant role in speciation. In such plants, speciation occurs at a faster pace but deleterious mutations lead to the end of the lineage. To survive most of such plant develop methods which allow only crossbreeding.

3. Will geographical isolation be a major factor in the speciation of an organism that reproduces asexually? Why or why not?

An asexual reproducing organism multiplies in number through asexual means like binary fission, budding, fragmentation. These methods form the exact copy of genetic material, without having any opportunity to include variation in genes. Any sort of deleterious mutation results in the removal of the lineage. Here geographical isolation does not come into play as every organism is reproductively isolated from each other individual.

Heredity and evolution solution Page 156
1. Give an example of characteristics being used to determine how close two species are in evolutionary terms.

A characteristic is a trait or behaviour. We can relate two species from its characteristics, like appearance, limbs, the structure of bones, cranial capacity, carpels, phalanges, number of chromosomes etc. A closely relates species have more similar characteristics. As species become distant, their similarity decreases and diversity increases. 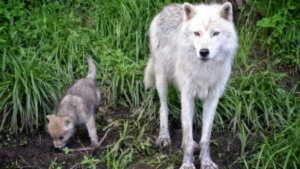 Humans and apes DNA are quite related in structure and the number of chromosomes differs by only one pair (humans have 23 pairs of chromosome while apes have 24 pairs of the chromosome).

Amphibians (frog) can live in both water and land, it shows they have evolved from water animals like fishes.

Dogs and wolves look very similar. It is very hard to differentiate between a pup of a wolf and a dog.

4. Carbon and its Compounds.

8. How do Organisms Reproduce?