Based on the mode of nutrition, we classify all animals and plants and microorganism into two groups.

Autotrophic mode of nutrition include plants, algae and cyanobacteria. These organism has developed a specific ability to trap the energy of sunlight to fulfil their requirement of energy. The process is called Photosynthesis. For this, they have a green coloured pigment called chlorophyll. Organelle storing chlorophyll is called chloroplasts. It converts water and carbon dioxide into glucose. Glucose serves as a source of energy and is readily used by cells to liberate energy. Excess glucose is stored in various plant organs like root, fruit and seed as starch, sugar etc.

This mode of nutrition include animals and other organisms like insect, fishes, microorganisms. Here they utilise the energy obtained by plants. This process requires oxygen which they take from the environment either by diffusion or by lungs.

Food obtained like starch and protein are complex molecule and require conversion into simpler form through a process, digestion. A single-celled organism like amoeba and paramecium engulf the food from outside. Here digestion of food happens in food vacuole formed. Fungi release the digestive enzymes outside the body. Enzymes degrade the food into simpler substances which are absorbable by the fungi.

Humans and other animal have developed specific organs for digestion. They are

We ingest food from the mouth. Mouth breaks the food into the smaller size. Salivary gland secrets Salivary amylase which breaks glucose into simple sugar. Stomach break food into the more smaller size. It also releases pepsin and hydrochloric acid. Pepsin degrades the proteins into an amino acid, and hydrochloric acid provides an acidic medium which is necessary for pepsin activity. We call this semi-digested food as bolus, it passes to the small intestine.

The primary function of the small intestine is absorption. It has a long tube coiled inside with circular folds and finger-like projections called villi. These folds and projections increase the surface area to increase the absorption rate. Furthermore, Villi contain a large number of blood vessel to transport digested food to every part of the body.

The further breakdown of food also happens in the small intestine, for this pancreas secrete pancreatic amylase for remaining starch, trypsin for protein and lipase for fats. Together they are called Pancreatic juice. The liver also secretes a yellow fluid called bile juice. Bile juice helps lipase to work upon lipids through emulsification.

Now you have learned that glucose is readily absorbed and transported to every cell. But how energy comes through glucose! The answer is respiration. Our body cells convert glucose into more simpler compound and energy is released. You can compare glucose as fuel. Fuel burns and drives your vehicle. Similarly, glucose act as fuel and respiration drives the cells.

ATP stands for Adenosine triphosphate. It is a high energy compound. When glucose is broken down through respiration The energy released is used to form ATP. This ATP acts as a storehouse of power or energy currency of the cell.

All organism uses glucose as a universal source of energy and converts it to pyurvate, a three-carbon molecule.

Pyruvate further breaks into different molecules depending on organism and type of cells which liberate energy.

Anaerobic respiration: Some bacteria break pyruvate in the absence of oxygen (so-called Anaerobe) into ethanol(2C), carbon dioxide and energy.

Aerobic Respiration: Here organism break pyruvate into carbon dioxide and water in the presence of oxygen. This process liberates more energy than anaerobic respiration and all plant and animal use this process.

There is another type of respiration which happens in our muscle cell. When we work hard, and there is no sufficient quantity of oxygen to muscle cells. Here they convert pyruvate into Lactic acid(3C) with the release of energy. 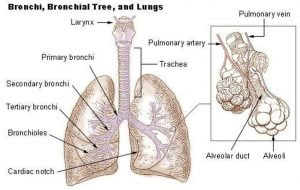 Unicellular organisms are in direct contact with the environment, so they do not need any particular organs, and simple diffusion process is sufficient for their oxygen demand.

Same is not the case with humans and other bigger animals. So to meet their oxygen demand, they have lungs.

Air which we breath goes to the trachea (air pipe) which further divide into bronchi. Bronchi to bronchiole and finally into alveoli. You can compare this with a tree. The main trunk of tree divides into branches and eventually end at a leaf. This branching increases the surface area where gaseous exchange can take place. Alveoli are tiny sac or balloon-like structure. Fine blood capillaries surround it. These capillaries absorb oxygen from the lung and transport them to all parts of the cell. Carbon dioxide, a by-product of respiration is a harmful waste for the body. It also needs to be excreted out. Lung also acts as an excretory organ for these gases as these gases find their exit through the lungs. And when we breadth out these gases also goes out of the body.