Essay on History of computers/Evolution of Computers 400-500 words

Essay on History of computers/Evolution of Computers

While computers are now an important part of human life, there was a time when computers did not exist. Knowing the history of computers and their progress can help us understand how complex and innovative computer manufacturing is.

Perhaps the most important date in the history of computers is 1936. In the same year, the first “computer” was developed. It was created by Konrad Zuse and dubbed the Z1 computer. This computer stands as the first because it was the first fully programmable system. There were devices before this, but none had the computing power that differentiates it from other electronics.

No business had seen profit and opportunity in computers until 1942. This first company was called ABC Computer, which was owned and operated by John Atanasoff and Clifford Berry. Two years later, the Harvard Mark I computer was developed, advancing the science of computing.

During the next few years, inventors around the world began to discover more about computers to study and how to improve upon them. They call the introduction of the transistor in the next ten years, which would become an important part of the inner workings of the computer, the ENIAC 1 computer, as well as many other types of systems. ENIAC 1 is probably one of the most interesting, as it requires 20,000 vacuum tubes to operate. It was a huge machine, and it started a revolution to make computers smaller and faster.

The computer age was changed forever by the introduction of International Business Machines, or IBM, in the computing industry in 1953. Throughout computer history, this company has been a major player in the development of new systems and servers for the public. And personal use. This introduction brought the first real signs of competition within computing history, leading to faster and better development of computers. His first contribution was the IBM 701 EDPM computer.

In 1955, Bank of America teamed up with Stanford Research Institute and General Electric to build the first computers for use in banks. MICR, or Magnetic Ink Character Recognition, along with the actual computer, ERMA, was a breakthrough for the banking industry. It was not until 1959 that the pairing system was put into use in actual banks.

In 1958, one of the most important breakthroughs in computer history was the creation of the integrated circuit. This device, also known as a chip, is now one of the basic requirements for modern computer systems. On each motherboard and card within a computer system, there are several chips that contain information about what the board and card do. Without these chips, the system as we know them today could not function.

Gaming, Mice and the Internet

For many computer users, games are an important part of the computing experience. In 1962 the first computer game ‘Spacewar’ was created by Steve Russell and MIT.

One of the most basic components of a modern computer, the mouse, was created in 1964 by Douglas Engelbart. It derived its name from the “tail” emanating from the device.

One of the most important aspects of the computer today was invented in 1969. The ARPA net was the original Internet, which provided the foundation for the Internet as we know it today. This development will result in the growth of knowledge and business across the planet.

It wasn’t until 1970 that Intel entered the scene with the first dynamic RAM chip, resulting in an explosion of computer science innovation.

The first microprocessor was on the heels of the RAM chip, also designed by Intel. Apart from the chip developed in 1958, these two components would form the core components of modern computers.

A year later, the floppy disk was created, which derives its name from the flexibility of the storage unit. This was the first step in allowing most people to transfer bits of data between unconnected computers.

The first networking cards were made in 1973, allowing data transfer between connected computers. It is similar to the Internet but allows computers to connect without the use of the Internet.

The emergence of home PCs

The next three years were very important for computers. This was when companies started developing systems for the average consumer. The Scelbi, Mark-8 Altair, IBM 5100, Apple I and II, TRS-80, and Commodore pet computers were pioneers in this area. Along with being expensive, these machines started the trend of computers in common homes.

One of the most prominent change in computer software occurred in 1978 with the release of the VisiCalc spreadsheet program. All development costs were paid off within a two-week period, making it one of the most successful programs in computer history. 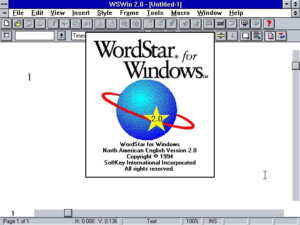 1979 was probably one of the most important years for the home computer user. This is the year that WordStar, the first-word processing program, was released for sale to the public. This drastically changed the usefulness of the computer for the everyday user.

The IBM home computer helped revolutionize the consumer market rapidly in 1981, as it was affordable for homeowners and standard consumers. In 1981 also the mega-giant Microsoft entered the scene with the MS-DOS operating system. This operating system completely changed computing forever, as it was easy enough for everyone to learn.

The Competition Begins Apple vs. Microsoft

During the year 1983, computers saw another significant change. The Apple Lisa computer was the first with a graphical user interface or GUI. Most modern programs have a GUI, which allows them to be easy to use and pleasant to the eye. This marked the beginning of our dating most text-based only programs.

Beyond this point in computer history, there have been many changes and changes, from the Apple-Microsoft wars to the development of microcomputers and the variety of computer breakthroughs that have become an accepted part of our daily lives. Without the very early first stages of computer history, none of this would have been possible.

The history of computers dates back to the early 1900s; in fact, computers have been around for more than 5000 years.

In ancient times a “computer” (or “computer”) was a person who performed numerical calculations under the direction of a mathematician.

Some of the better-known tools used are the abacus or the Antikythera Tantra.

Around 1725, Basil Bouchon took paper punched in a loom to set the pattern to be reproduced on the cloth. This ensured that the pattern was always the same and there was hardly any human error.

Charles Babbage. (1792–1871), was ahead of his time, and using the punch card idea, he developed the first computing devices that suffices scientific purposes. He invented Charles Babbage’s differential engine, which he started in 1823 but never completed. He later began work on the Analytical Engine, which was designed in 1842.

The credit for inventing computing concepts goes to Babbage because of his findings such as conditional branches, iterative loops, and index variables.

Ada Lovelace (1815–1852), a collaborator of Babbage and the founder of scientific computing.

Babbage’s inventions were greatly improved upon, with George Scheutz working on a smaller version with his son Edward Scheutz, and by 1853 he had built a machine that could process 15-digit numbers and fourths. Could calculate the difference of the sequence.

Among the first notable commercial use (and success) of computers was the US Census Bureau, which used a punch-card device designed by Herman Hollerith to tabulate data for the 1890 census.

To compensate for the cyclical nature of the Census Bureau’s demand for its machines, Hollerith founded the Tabulating Machine Company (1896), one of three companies that merged to form IBM in 1911.

Use of digital electronics in computers

Later, Claude Shannon (1916–2001) first suggested the use of digital electronics in computers, and in 1937 and J.V. Atanasoff built the first electronic computer that could solve 29 equations simultaneously with 29 unknowns. But this device was not programmable.

During that crisis, the development of computers was rapid. But many projects remained secret until much later due to restrictions, and a notable example is the British Army “Colossus” developed by Alan Turing and his team in 1943.

In the late 1940s, the US Army commissioned John V. Mauchly to develop a device to calculate ballistics during World War II. As it turned out, the machine was only produced in 1945, but the Electronic Numerical Integrator and Computer, or ENIAC, proved to be a turning point in computer history.

The ENIAC proved to be a very efficient machine but not very easy to operate. Any change sometimes requires reprogramming the device. Engineers were aware of this obvious problem and developed a “stored program architecture.”

Eckert and Mauchly later developed what was arguably the first commercially successful computer, the UNIVAC.

The end of the transistor era, inventor.

The late 1950s saw the end of valve-operated computers. Transistor-based computers were  were smaller, cheaper, faster, and much more reliable.

Corporations were now building new computers instead of inventors.

Some of the better known are:

TRADIC at Bell Laboratories in 1954,

The IBM 704 and its successors, the 709 and 7094. The latter introduced I/O processors for better throughput between I/O devices and main memory.

The first food computers, the Livermore Atomic Research Computer (LARC) and the IBM 7030 (aka Stretch)

Now that was the basis of computers, computers with transistors were faster, and with stored-program architecture, you could use computers for almost anything.

Since 1985, there was a competition to install more and more transistors on a computer. Each of them could perform a simple operation. But computers haven’t evolved much other than being faster and capable of doing more operations.

The concept of parallel processing has been more widely used since the 1990s.