The Treasure Within Summary in English It So Happened Chapter 4

The treasure within is an inspirational interview of Hafeez Contractor by the author. The interview focuses on the school time events of Hafeez and how his particular interest in architecture made him a leading architect of India.

Excerpt of the interview

Hafeez Contractor was once a normal boy in the school but his interest to study faded in later classes. His favorite time pass was playing games, cracking jokes and doing pranks on others. He never wanted to study and studied only a day before the exam. The condition was such that, there was a high demand for his books by his juniors as they were almost like new.

He was the leader of his gang and was more interested in gang fights and strategy planning rather than academic achievements.

Hafeez Contractor has a photographic memory. He would like to remember things as a photograph rather than a word. During his childhood, class three teachers told him ” he is good in sketch drawing and should opt architect as a career”. He did not like any of the class subjects whether it is science, English, Hindi, etc. Mathematics was a nightmare for him.  During his school time, he was more interested in drawing designs of guns and forts. If there was rain, his topic of the day was making a picture of the dam, calculating how much water it will hold; how the water will move, etc. 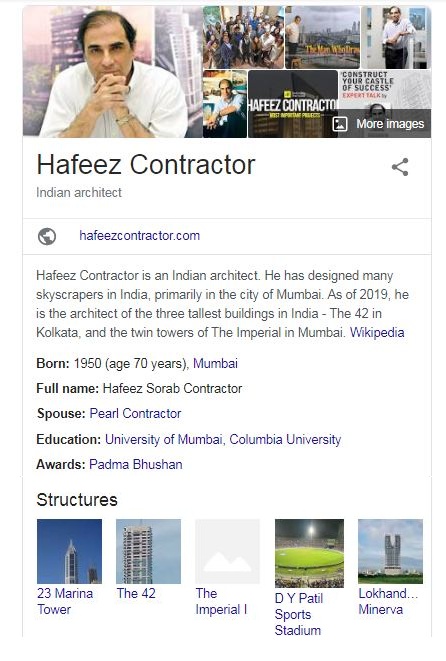 How he got into the field of architecture

Hafeez got only 50% in SSC. It was very unlikely to get an architect college with such a grade. He joined an average graduation college in Mumbai (Jai Hind College). Hafeez had to choose French as the language. But he was not well versed in the French. His cousin helped in teaching him the French. His cousin’s husband was an architect and saw his hidden talent when he made many designs with ease. By the advice of the cousin’s husband, he met Homi Dallas. Homi Dallas was the president of the Indian Institute of Architect. He saw his talent and helped him to get into college. Now, he is a leading architect with more than hundreds of very big projects like 23 Marina Tower, Lokhandwala Minerva, The 42, etc.

Moral of the story

This story about Hafeez Contractor shows that we should look into our interest and find a way that helps us make a career in that field of interest.

Next: The Treasure Within Solution.

The Treasure Within Hindi Summary.

The Treasure Within Summary It So Happened Chapter 4.

Ref: Chapter 4 It So Happened.