The Selfish Giant Summary; Class 8 It so Happened Chapter 3 summary

The Selfish Giant is a beautiful fictitious story by Oscar Wilde. This story revolves around a play garden which becomes lavish in the presence of children and dries in the absence of children. This story teaches us to treat kids in the right way. Let us start the story.

There was a lovely garden in a city. Kids used to play there after school time. There were numerous grass flowers and peach tree there. They used to cheer the kids and bird used to sing mesmerising songs. In the spring plant brought flowers while in winter they were giving sweet fruits. The kids we happy like never before. But this happiness did not survive long.

The arrival of the selfish giant 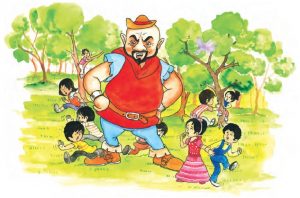 The garden belonged to a selfish giant. The selfish giant was at his friend’s home for seven years, but now he had returned. He scolded the children playing in the garden and soo raised the wall around the yard.

Persistent winter in the garden

Now the trees, grasses and birds were said as there was no one to hang around their twigs and listen to the bird’s song. Trees stopped blooming and fruiting while the bird stopped singing. Now the spring came in the whole country, but they did not enter the garden. ( Guide: The story is written as per European countries like the United Kingdom. There the winter is of long duration, and there is only spring season in place of summer)

As a result, there was still winter. Once a flower raised his head. He saw the notice board by the giant and retracted back.

Now the giant was restless. He did not understand the cause of such a long winter. The snow had covered the grasses with white sheet and frost had painted all the trees with silver colour. Frost and snow invited Northwind ( chilly winds from North). Winds from the North roared throughout the garden. North winds brought hail to the garden. Hail broke all the chimney and roof slates.

The arrival of spring in the garden

One day children made a hole in the wall and entered the garden. Now the spring came, birds started singing. The giant woke up. He had not heard songs for a long time. Bird’s chirping felt like king’s musician to him. 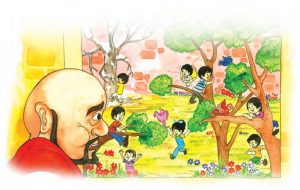 The giant woke up and looked out. He saw children playing in the garden and trees welcoming the kids by lowering their twigs. The giant understood why spring came so late.

He saw a kid in the garden alone, trying to climb the tree. Frost and snow were still there on that tree. The tree had already lowered his branches, but the kid was still too small to climb. The giant approached secretly from the behind and helped the kid to climb. The kid was happy, and he kissed the giant’s cheek. Other children were frightened by the giant and were running. But when they saw the giant helping the boy, they also become happy. The giant asked the kid to stay and broke the wall. 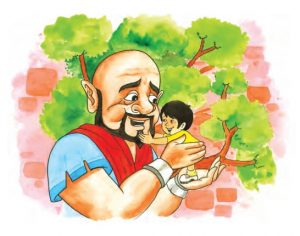 Now onwards children played in the garden and thanked the giant. The giant asked about the small kid. Other kids were also not knowing about that little kid. They told that they also saw that kid for the first time. Days pass the giant was still missing him because he was the boy who kissed him on his cheeks.

The arrival of the mysterious kid 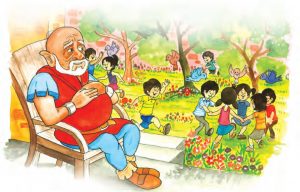 Years passed, and the giant grew old, but he never forgot the kid. He now did not fear from the winter as he knew winter is just passing by. One day he saw the same small kid playing on the same tree. The giant became happy and ran toward him, shouting “where were you”. Once he reached near the kid, he saw big nail scratches on his hand and the feet. The giant was in a rage, asking how this happened. The child replies “these are wounds of love”. 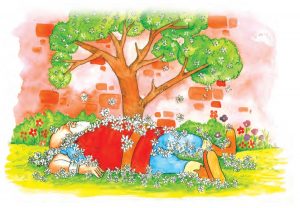 Next day children came in the afternoon to play. They saw the giant lying dead, covered with white flowers near the tree.

Next:  The Selfish Giant Summary in Hindi.

1. How the Camel got the hump Summary.