The Fight Summary Chapter 6 It so happened Class 8

The fight is a fictional story by Ruskin Bond. In this story there is a  boy ‘Ranji’; his courage helped him to make a nasty situation into a fruitful outcome.

Ranji and the beautiful lake

It was summer vacation and Ranji was at home in Rajpur. Every day, he used to walk in the nearby forest. One day he found a beautiful and tidy lake in the forest rock. The water was clean and the pebble stones at the bottom were clearly visible from the surface. Ranji dived and quenched the heat. He decided to come here every day.

The next day, he dived into the lake like yesterday and enjoyed the cool water of the lake. After swimming, he was resting on the rock stone which was under the shadow of the sal tree. He was resting until he found a boy staring at him. Ranji came into sense and looked at the boy. 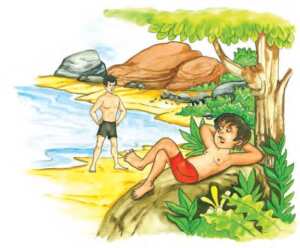 The boy was a well-built boy. He did not like Ranji swimming in the lake. He told Ranji that this is his lake and he doesn’t like some stranger into it. The boy went more into the argument. He started saying I am a warrior I will beat you.

Ranji initially tried to make the situation comfortable. When the boy asked him in a hostile manner “what are you doing here, mister”; the response of Ranji was “I am swimming here, why do not you join in”. But, now the situation was beyond manageable condition. Ranji now replied if you are a warrior than I am a fighter.

Fight with the warrior 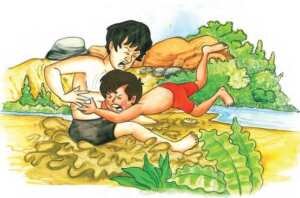 This was enough for the boy he started the fight with a vigorous slap on the Ranji’s face. Ranji also made a big punch on the boy’s face by his powerful fist.

They decided to stop continue the fight the next day.

Warrior in the evening

Ranji was now at home. He took some rest and went to the market in the evening. There, he took some lemonade and jalebi. He saw the warrior coming near him. Firstly, he thought to run away, but he did not. He stood firmly and looked at the warrior with anger. 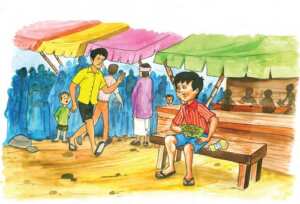 Ranji was in doubt, whether to give up or fight again.  He decided to go and fight irrespective of the outcome. He went to the lake. There he saw the warrior on the other side of the lake.

The warrior was massaging his body with the oil. He asked Ranji to come on his side. Ranji initially asked the warrior to come to his side. But when the warrior challenged that Ranji fears from the length of the lake. He dived fastly into the lake and came to the surface until he was very near to the warrior.

The warrior was surprised by his diving. He asked Ranji, how did you do it. 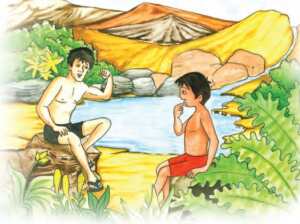 Ranji told them it is very easy and told him how to dive.

Now the warrior tried to dive but he only struck his full body with the water. It was like a crash and birds on nearby branches started screaming. Ranji laughed and told the warrior how to do it again.

Now Ranji dived in, circled the warrior, and surfaced from behind. The warrior was amazed again. He asked Ranji if he can teach him. Ranji replied yes. Now both were friends. The warrior now told that his name is Suraj and he is a Pahlawan.

Moral of the story:

Here Ranji did not submit to Suraj and decided to come again for the fight. If he had not come, he would have lost all his right for the lake forever. It was his courage that Ranji and Suraj both became friends. This story teaches us to be courageous and does not submit to some bully.

The Fight Summary Chapter 6 It so happened Class 8