Tansen MCQ/Objective Questions Chapter 5 A Pact With The Sun

Who was the father of Tansen?

Where did he took birth?

Who was Swami Haridas?

Why Swami Haridas told Tansen’s father that Tansen is a naughty boy, but he is talented?

What was the last wish of Tansen’s father from Tansen?

Answer
Explanation
Mohammad Gous was a holy man of Gwalior. Mukandan Mishra was devoted to him. His dying wish was that  Tansen goes to Mohammed Gous. While living in Gwalior with Gous, he visited court of Rani Mrignaini and married one of their court singer ‘Hussaini’

What was the name of his wife?

Answer
Explanation
While living in Gwalior with Gous, he visited court of Rani Mrignaini and married one of their court singer ‘Hussaini’

Answer
Explanation
Tansen sang for Akbar sometimes. Akbar was very impressed by Tansen. He invited Tansen to join his court. It happened in 1556

Which raga jealous courtiers requested from Tansen to sing?

Answer
Explanation
Other courtiers was jeoulous of Tansen. They kne that Raag Deepak creates a high temperature and turn the singer into ashes.

Who went to Akbar to ask Akbar test Tansen’s music?

Who gave the idea to sing Megh raag along with Deepak? 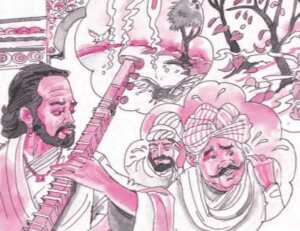 When Saraswati started singing Raag Megh along with her friend Rupawati?

Tansen remained the court singer till:

Answer
Explanation
Tansen remained Akbar’s court singer til he died. He died in 1585.

A Pact With The Sun MCQs

Tansen MCQ/Objective Questions Chapter 5 A Pact With The Sun