1. State whether the following statements are always true, always false or ambiguous. Justify your answers.

(i) All mathematics textbooks are interesting.
(ii) The distance from the Earth to the Sun is approximately 1.5 × 108 km.
(iii) All human beings grow old.
(iv) The journey from Uttarkashi to Harsil is tiring.
(v) The woman saw an elephant through a pair of binoculars.

Answer: (i) Ambiguous: It may vary from person to person. One may find a book interesting, while another person may be repealed by the same book.

(ii)Always rue: The distance between the earth and the moon as estimated by the scientists is around 149.86 million years i.e. approx 1.5 x 108.

(iii)Always true: We all see people grow and become old. A child becomes a boy; then a teen; then an adult and then into an old person.

(iv)Ambiguous: You may feel tired if you go on foot. However, if you go by a chopper it won’t be tiresome.

(v)Ambiguous: Here we do not know which woman the book is referring to.

2. State whether the following statements are true or false. Justify your answers.

Answer: (i) True: A two-dimensional closed structure made by 3 or more lines is a polygon. So, a hexagon is also a polygon.

(ii) True: Some polygons may have 5 straight lines making it a pentagon.

(iii)False: We call a number as even if it is divisible by two.

3. Let a and b be real numbers such that ab ≠ 0. Then which of the following statements are
true? Justify your answers.

Answer: (ii) ab ≠ 0 is possible only if both a and b are non-zero numbers.

4. Restate the following statements with appropriate conditions, so that they become true.

(ii) Here it is possible only if either both numbers are negative or both are positive.

(iv) Only the diagonals of a parallelogram (rhombus/square/rectangle) bisect each other. So to make the statement always true, we will have to specify that the quadrilateral is a parallelogram.

1. Given that all women are mortal, and suppose that A is a woman, what can we conclude about A?

Answer: From both the statements we can conclude that A is a woman and is mortal.
2. Given that the product of two rational numbers is rational, and suppose a and b are rationals, what can you conclude about ab?

Answer: From both the condition we can find that the value of y is 7.
5. Given that ABCD is a parallelogram and ∠ B = 80°. What can you conclude about the other angles of the parallelogram?

6. Given that PQRS is a cyclic quadrilateral and also its diagonals bisect each other. What can you conclude about the quadrilateral? 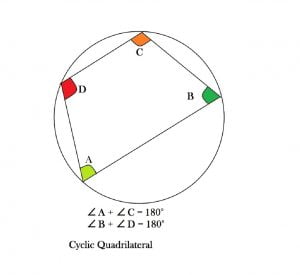 Answer: From both the statements we can say that the square root of 3721 is irrational.

This conclusion is incorrect because 3721 is not a prime number as it is square of 61 i.e. 61×61=3721. Here our statement was false. As a result, we came with the wrong conclusion.

In each of the following questions, we ask you to prove a statement. List all the steps in each proof, and give the reason for each step.

1. Prove that the sum of two consecutive odd numbers is divisible by 4.

Hence, it will be divisible by 4.

2. Take two consecutive odd numbers. Find the sum of their squares, and then add 6 to the result. Prove that the new number is always divisible by 8.

Next consecutive odd no= 2n+3 (General property of integer)

Hence the new number formed as per the question is divisible by 8.

Now we will prove each case seperately.

as per the question

Proof: x and y are the rational numbers. So, they can be expressed as fraction of integer.

Now, as per the question,

here mp and nq will be an integer. ( By the general property of integer)

and nq will not be equal to zero. ( By the general property of integer)

1 thought on “Proofs in Mathematics A1 Class 10 Exercise Solution”