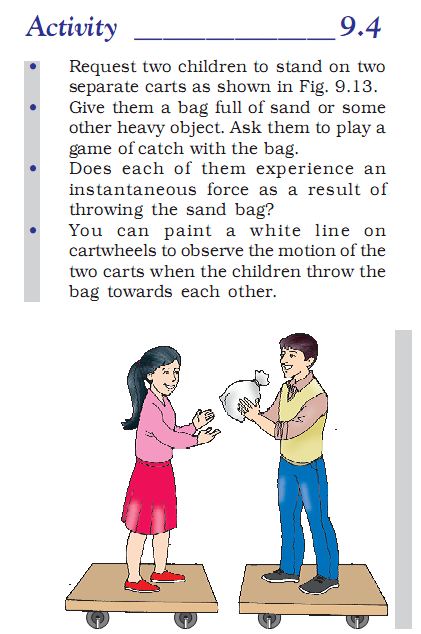 Activity 9.4 asks us to stand on a cart and play the game of catching sandbags.

While throwing the bag our body and the bag also moves but in the opposite direction of the bag.

For every reaction, there is an equal and opposite reaction. Here when we throw the bag, it exerts an opposite force on the body. As a result, the cart also starts moving but in the opposite direction. It was Newton, who first saw this effect. So, we call this as Newton’s third law of motion.

For every action, there is an equal and opposite reaction.

Recoiling of a gun after firing: You must have seen a jerking effect of a gun while firing. When bullet moves ahead it exerts an opposite and equal force on the gun. As a result, the gun recoils with great force as well. To overcome this effect, the gun is made heavy with a big base.

Next: Activity 9.5 Class 9 Science Force and Laws of Motion.