The activity wants us to study a few features of plants and asks us to correlate them.

Soaked seeds of a Green gram, peas, Tamarind splits into two while that of  Wheat, Maize do not split.

When we look at the root, leaves, and flowers of these plants, we see that Green gram, peas, Tamarind have tap roots, reticulate leaf venation, and their flowers have a part in multiple of four or five with pollen in three furrows. While in Wheat and Maize we see the fibrous root, with parallel venation in leaf. Their flowers are in multiples of three with single pollen furrow.

Monocot shows similar root, leaf, and flower design. This design differ from dicots and we can easily differentiate them on the basis of these patters.

During the initial period of classification, scientists found the similarity in the plant having the same type of seed. So, they used this property to classify them. Today we have two categories: one is dicot and another is a monocot. 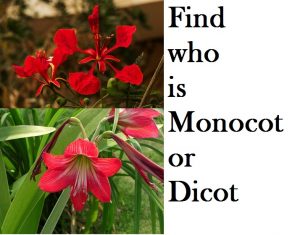 Why do we classify organisms?