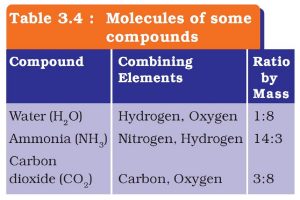 A compound or molecule reacts with another and forms a different compound. Here the proportion in which they react always remain constant. For example, in real experiments, we always see that 2 gm of hydrogen always react with 16gm of oxygen and forms a water molecule. Thus water has always molecules in the ratio of 1:8. We call this dogma as the “law of definite proportion”.

If we know the chemical formula of a compound, then the ratio of the number of atoms is simply the numbers in the formula. E.g. Atomic ratio of hydrogen and oxygen in H2O is 2:1.

If we are given the ratio of masses of a substance, then we divide it by their atomic masses. The number we get is the ratio in the number of the atoms.

Number of H atoms = Mass ratio of Hydrogen in water/atomic weight of hydrogen = 1:1 = 1

Simplest ratio: We calculate the simplest ratio by multiplying the no with the highest common factor (HCF).

Similarly, ammonia NH3 has a weight ratio as  14/3, and their respective atomic weights are 14 and 3.

Similarly, carbon dioxide has a weight ratio of 3:8.

If we know the number of reactants and amount of product formed in the chemical reaction, we can calculate their ratio of weights and the chemical formula.

See also: Experiment to demonstrate that under a chemical reaction mass remain always constant. Law of conservation of mass; Activity 3.1.